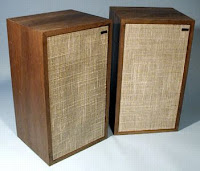 Dynaco and the success of its A25

The audio equipment company Dynaco was founded in 1955 and produced affordable speakers, which were at the same time of decent quality. Their products from the 60ies and 70ies are still on the vintage market and if you can acquire a set of Dynaco speakers you will usually get a set of good quality speakers for little money. Dynaco´s popularity shrank in the 80ies, after a successless release of a new series of speakers and ended finally with the acquisition by Panor Corporation in 1991.
The Dynaco A-25, a speaker of the” A-series” was Dynaco´s most successful loudspeaker. It is a bookshelf speaker produced in Denmark and has been sold over 600k times at an introductory price of under 80$, a price that was highly competitive to other brands and is one of the main reasons why this speaker was so successful.

The Dynaco A25 is a 2-way speaker, which reduced the problems that can occur when different drivers cover the same frequencies. Each speaker is 20” x 11,5” x 10” and weighs about 20 pounds. As most speakers of this time, it features walnut veneer. Considering the small size and age of these speakers, one is surprised about the tightness and strength with which the bass hits. I have never tested A-25s under very high volume, but read that they will become less clear in this condition. However, if you plan to gather a decent vintage sound system, the A-25s are a great catch and they are comparably easy to find too. Have a look on ebay or craigslist and you will usually find several sets at a decent price. The A-25´s younger brother, the Dynaco A-35 can also be an alternative, as they are fairly similar. Check out our review of the Dynaco A-35 speaker. Decent for this speaker is approximately between 200$ and 280$, depending on the condition. You should expect to pay around 350$ for a pair in good condition on ebay, being refoamed or with old foams in good condition.
As these speakers were rather affordable they were targeted by a group of everyday listeners, maybe families, but less by enthusiasts who would care about them with extreme attention. Therefore you will find sets that have some scratches or stains more frequently. If you find some for around 100$, with stains or scratches, you can easily sand them and give them a new finish. They will look like new!