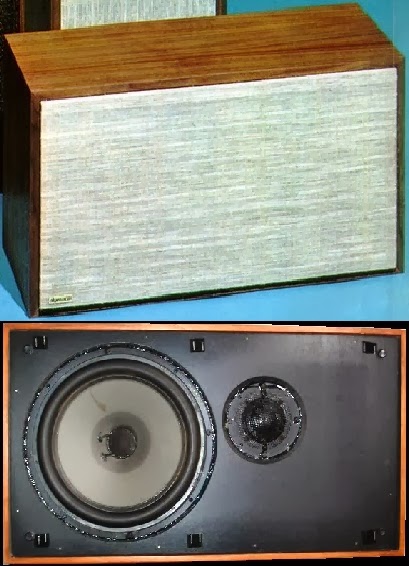 Dynaco was an audio system company founded in 1955. They were especially popular from 1960-1970 for their high quality and simultaneously affordable audio components. The company is well known for a few very well made stereo amplifiers and speakers during that time.
One of these is the Dynaco A-35 loudspeaker. The A-35 was a refined improvement over its predecessor, the A-25. In fact, the Dynaco A-35’s have the same woofer and tweeter as the A-25, but in a bigger enclosure. With a smooth, wide range and a crisp sound, it had a much better and more defined low end. Many stereo enthusiasts consider this to be Dynaco’s best speaker.
The A-35 was housed in a more complex cabinet with a different crossover. This made for a much more articulate sound. It has more bass than the A-25 and dynamic capability. A high performance, two way system, the speakers have a non-rigid hemispheric tweeter with wide dispersion, which is crossed over at 1200 Hz to an extended excursion 10″ woofer. The 10″ woofer has a rubber surround, which is more durable than the usual foam surrounds found in most vintage speakers.
The cabinet has two sealed chambers, partitioned in between by a damped vent. At lower frequencies, the enclosure gets larger for a more neutral sound. The speaker can be used with amplifiers having continuous power ratings up to 60 watts rms per channel, and the minimum suggested power is 20 watts. On the back of the speaker there is a selector that increases and decreases the high and mid range tones.

The speaker´s big plus is its warm and laid back sound. The tonality is very natural and deep. A high quality speaker, even now. The A-35’s are housed in a real walnut cabinet. Rich highs and mid range tones. It does have a little weakness, though. The imaging is good, but a bit too directional. Compared to its predecessor, the Dynaco A-25, the A-35 speakers have a more toned down bass. To compare the two, have a look at our review of the Dynaco A-25 .