The JBL L-100 Century is JBLs most famous vintage speaker from the 1970ies and is an absolute classic. It has been produced in several versions over the years, so it is well possible to find slightly different midrange and tweeter placements. You can find an example of a newer design at the end of this article.
When JBL focused on offering foremost consumer electronics (vs. professional studio equipment) in the 70ies, it started the L100 model, which became the most sold speaker model up to that date. No other company had produced a speaker with similar sales. Therefore JBL continued to build and sell the L- series and introduced newer versions with improved drivers and crossovers throughout the 80ies.Those newer speakers of the L-series do not have much in common with the original L-100. Read for example our review of the JBL L112 Century II speaker.

The JBL L-100 Century was a milestone and huge success for JBL, but was not free of weak spots. At first to its strengths:
As mentioned, the L-100 has a few weak spots, some of which decreased over the years with new versions of the L-100, other models and other drivers. Commonly claimed weak spots of the L-100 are: 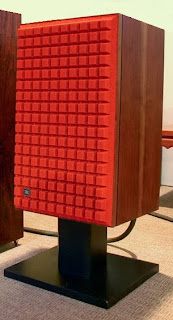 The JBL L100 measures 23 1/2″ to 14 ½” to 13 5/8″ and is therefore a rather large bookshelf speaker. The cabinets are made out of real wood, which causes the weight of 45 lbs. per speaker. This combination was a bit of a problem for me, as the speakers were neither suitable for any of my shelves, nor were they suitable to stand on the ground due to their sze. I, and many other owners did finally buy small stands, which I can also recommend, as it gives the speakers the elevation, hight and position they require to shine.
Each L100 has a 12” woofer, 5” midrange speaker and a 1 1/2” tweeter. Noteworthy are the controls for high- and mid-frequency adjustment. The speaker sound is dynamic, remains very clear on high volume, but basses are rather “punchy”. Personally I felt most comfortable when listening to Rock, but have the feeling that they are not too suitable for fine vocals. Other reviewers noted too, that they did not like to listen to Jazz or female singers on the L100.

The JBL-100 is definetily worth it being refoamed. Many of them have rotted foam surrounds which can easily be replaced. A refoaming kit can usually be bought for around $30-40, replacing the old foams will take around 1 to 2 hours and is not difficult at all! It does not require any particular skill, just a calm hand and a little patience. You can find a fitting refoam kit here: > Speaker Surround Kits <. Alternatively, ask in one of the big HiFi forums, you will likely find assistance quickly.
JBL L-100 Century Price: $380-550
(Depending on overall condition, keep in mind that broken drivers are fairly expensive for this model)

Read our other reviews of JBL´s L-Series: 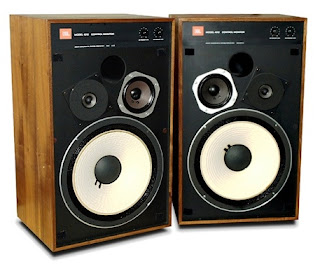