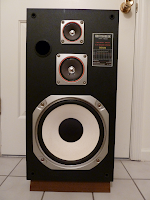 Fisher developed a variety of speaker systems at a very competitive price. During the 1960ies, the company produced several high fidelity audio electronics. However, since the late 1970ies, Fisher Corp. became known as a, competitively priced, low-end speaker manufacturer. Fisher´s DS-826 is from the mid 1980ies, a speaker system for which some people request more than $100, only a few are willing to pay more than $40, but most won´t pay anything at all.
I am a happy owner of a pair of DS-826s and willin to admit that I paid 40$ for a pair in rather bad condition. It was worth the money, as I enjoyed cleaning and restoring them, but I also didn´t know better at the time. If you see a pair on a garage sale, you should usually not pay more than $20, even if you find one in outstanding condition.

The three way Bass-reflex speaker produces a rather warm than clear sound, which is something you need to like. Each speaker has a 12″ woofer and a 4″ and 3″ speaker.
I am using them in addition to a BOSE Acoustimass 5, and I often prefer listening to the DS-826´s warm sound than to the BOSE´s clear highs.  Their surprisingly warm sound origins on Avery Fisher´s insistence to personally voice all Fisher speakers. His preference was the typical warm sound with very rolled off highs. As you can see in one of the pictures below, the “stands” or lowest part of the speaker is made of plastic, not wood, eventhough it looks like wood from the outside.

Personally, I enjoy this system because of its design. It doesn´t look to fancy, but the strong contrasts in color (black, red, white) make a really nice appearance. I took off the grills and do indeed enjoy looking at them closely every once in a while. 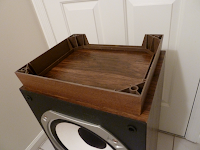