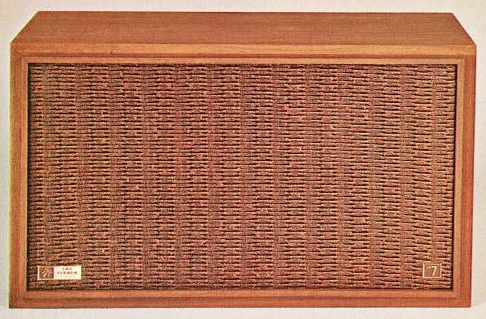 Fisher Corporation and the XP-7

Fisher´s XP speaker series from the mid 1960ies to 1970ies are even today of interest due to their decent manufacturing, materials and sound quality. The company´s shift to produce less expensive, non-high fidelity speakers started around two decades later in the early 1980ies. The Fisher XP-7 speaker entered the US market in 1966 when Fisher decided to stop the production of their older models XP-1A, XP-2A and XP-4A. Instead, Fisher introduced three new models to at a competitive price: The XP-6  for $99.50, the XP-7 for $139.50, and the XP-9 for $199.50. The XP-10 was not replaced and remained Fisher’s flagship speaker for $249.50. All speakers of the series with the exception of the XP-5a (the entry level model) were equipped with the newly invented soft-dome tweeter by Hecht, first mounted a year earlier on the XP-10. For more information about the XP-10 or Hecht´s invention of the first soft-dome tweeter, read our Fisher XP-10 review.
The XP-7 became a popular speaker at the time, as it was positioned between the much heavier and more expensive XP-9 and the XP-6, which was just below a 3-digit price. The pricing of the XP-7 model allowed customers to enter the high(er)-fidelity market at a price that was closer to the low-end (XP-6) than to the next better model in the product line (XP-9).

The Fisher XP-7 had been on the market from 1966 to 1969. It’s still around and frequently being restored. While there are newer models of the same speaker on the market (XP-7b and XP-7c), this one has still been the go-to speaker for a number of years. It is a three-way speaker system that contained a total of four speakers housed inside of two mid-range units and then sealed into sub-enclosures.  With dimensions of 14″ x 24 1/2″ x 12″ the XP-7 is one of the heavier speakers at approximately 45 pounds. It had a free-piston design as well as two five-inch mid-range speakers that were sealed into separate sub-enclosures. AcoustiGlas was used to fill the enclosures. The drivers are encased in a walnut cabinet with a brass grill.

Two later models, the XP-7b and XP-7c seem fairly similar to the original XP-7, but have actually a few noteworthy changes. The driver arrangement does already indicate the differences of the models. Note the diagonal placement of the midrange drivers and tweeters of the XP-7b and XP-7c in the picture on the right. The original XP-7 has a very different arrangement, as you can notice in the picture below this paragraph.
Most noteworthy is probably that the XP-7 is a 4-speaker threeway system and the XP-7b and XP-7c are 5-speaker fourway systems. All of the three speakers have a 12 inch bass driver, but whereas the XP-7 has two identical 5″ midrange drivers, the XP-7b and 7c have two 5 3/4″ midrange drivers, one for the lower midrange and one for the upper midrange. At last, the Xp-7b and 7c have two 3″ tweeters, instead of the 1 1/2″ soft dome tweeter of the XP-7. The introductory prices of the three models were: XP-7: $139.50; XP-7b: $149.50; XP-7c: $169.95.

There are a lot of strengths when it comes to the Fisher XP-7. It housed four speakers that were able to create a frequency response of 30-20,000 cps. The open air resonance of the bass speaker was 18-20 cps and the crossover frequencies of the treble speaker were 300 and 2500 cps. It is commonly

claimed that many Fisher speakers lack a clear sound and are rather heavy on the midrange. We perceive the XP-7 to be surprisingly clear and not at all to heavy in the low and midrange. As Fisher stated in their own advertisement “…since its introduction, the XP-7 has been awarded more top-level ratings from important national consumer magazines than any system of comparable size and cost”.
The main weakness lies on the fact that older Fisher XP-7 speakers are sometimes in fairly bad shape and need repairs. This means that you have to know a little something about the speakers if you want to get them up and running. The 12-inch woofer doesn’t come out easily, which means it may happen that you damage the cabinet in order to get it out. If you enjoy spending a little work on an old pair of speakers, the XP-7 can be a nice project.
Fisher XP-7 Price: $100-$150
(Depending on overall condition)